Feeding the fish on an island-hopping tour, krabi

Ahlan Wa Sahlan! Krabi should be considered Thailand’s premier destination for Muslim travellers. In contrast to other tourist regions in the kingdom, Krabi’s Andaman coast villages – including most of the islands – have an original population that is 100% Moslem, though of course the development of these areas has brought many Buddhist and Chinese Thais, as well as western expats, to live and work here.

Perhaps because of the local population, Krabi has always been a family-friendly place, generally avoiding the more salacious night-time entertainment that can be found in Phuket or Pattaya. It provides a safe and trustworthy environment for a family holiday; in addition, children are very well catered for in restaurants and elsewhere.

At the same time, it should be noted that most non-Muslim visitors to Krabi do not even realise they are in a predominantly Muslim area. They are made to feel comfortable and the locals have a very tolerant attitude towards tourists’ alcohol consumption and beach clothing (their livelihood depends on western tourism). We would like to think that for most open-minded visitors (Muslims and non-Muslims alike), this mix of customs will not be an issue.

Concessions to business aside, the Muslim community is very strong in Krabi. So there are also many factors that will make life easy for visitors of Islamic faith.

Where to find Halal food in Krabi

First – and probably foremost in Muslims’ minds when travelling – is food. Halal food is very easy to find in both Ao Nang and elsewhere around Krabi, including the islands. Most is of the street food, pavement eaterie variety, though there are also some good upscale dining options as well. 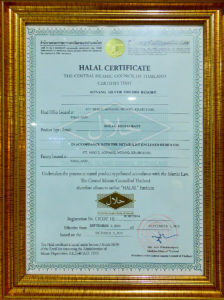 Halal certification is usually only sought by hotels

Very few restaurants, other than those in hotels, bother to seek official certification, but this need not be a worry: if a restaurant is owned by Muslims (as are all the places we recommend in the link above), it is sure that the food will be Halal, though please note that some establishments do serve alcohol on the premises (usually through a bar leased to a third party), as the majority of patrons request it.

For those who require it, there is a list of accredited restaurants published by The Halal Standard Institute of Thailand, though as mentioned, this is only a tiny percentage of the actual choice available here. Note also that it seems the restaurant kitchen is the only area certified: there is at least one restaurant in Krabi on this list that serves alcohol, and has pork on the menu.

In terms of where Moslem travellers to Krabi should stay, there are a significant number of Muslim-owned hotels in the region, which ensures that breakfast will be 100% Halal; the restaurants in these hotels will also serve Halal food.
Here is a list of the properties on mainland Krabi, with links to further info and booking, if available. If none of these suit, it is also possible to get room only deals at most hotels and eat out.

Note: as this list is quite long, we have starred properties we would recommend in terms of value for money, location and service.

Note: in Tubkaek Beach itself there are no Muslim owned hotels; however The Tubkaak Krabi Boutique Resort does not serve pork in any of its restaurants, with the exception of bacon at breakfast (served separately as part of the buffet).

Mosques, Salat, and travelling during Ramadan

In all of these hotels, as mentioned, Halal food will be served. In addition, the reception staff should also be able to provide information about Qiblah direction and prayer timings (many places in the village will be within range of the broadcast call to prayer). All bathrooms will also have a handheld shower (bidet) spray so that Wudu can be easily performed.

Walking along the beach at Nopparat Thara, Krabi

There are two mosques within the Ao Nang area. The first, Masjid Ao Nang, is located only 1km from the beach; the second, Masjid Klong Haeng, may be more convenient if you are staying on the other side of Ao Nang, in the Nopparat Thara area. This is also around 1km from the beach. Again, the hotel staff will be able to provide directions. There is also a mosque in Klong Muang village, near the main junction with the traffic lights.

Worth noting is that Krabi Airport also has a prayer room on the second floor.

If travelling during Ramadan, some of the smaller hotels may also be able to provide Sohoor and Iftar – these would probably be eaten with the family. The local mosques also prepare food for their communities and Muslim visitors would be welcome.

It is important to remember, however, that the vast majority of visitors to Krabi are non-Muslim and of western origin. There are therefore no hotels that provide separate recreational facilities for men and women, be they gyms, swimming pools or spas, as there is not enough demand for it. If privacy is important while swimming etc. we would highly recommend the rental of a private pool villa. Most are properties with high walls and it is also possible to arrange female only service staff for you. Male staff (usually drivers or gardeners) will be asked to give notice before entering the grounds.

It should also be noted that due to the large Thai Muslim local population, many non-Muslim owned hotels will be clearly aware of Muslims’ needs and be able to cater to them if given sufficient notice. Larger non-Muslim hotels often serve a Halal breakfast option, for example (though perhaps not other meals). Many hotel staff will also be Muslim, even if the hotel is not. So it is not essential to stick to the hotels listed above if another place is preferred.