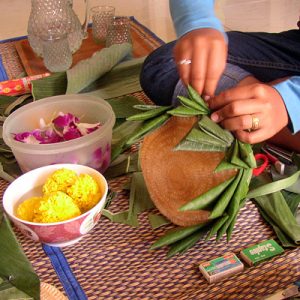 Making the basket for the Loy Krathong Festival

The whole of Thailand is gearing up for one of the biggest festivals in the annual calendar, Loy Krathong (pronounced loy k’tong) which is held on the night of the full moon in November, so this year (2012) on Wednesday 28th.

Like seemingly all the Thai festivals, Loy Kratong has a strong link to water: the main event being, as night falls, the setting adrift (loy) of flower-filled baskets (kratong) along waterways up and down the kingdom. This gesture gives thanks to the river spirits for providing them with fresh water all year. It’s also an occasion to symbolically send away all the bad things of the past year and pray for luck – and continuing water – for the coming dry months. 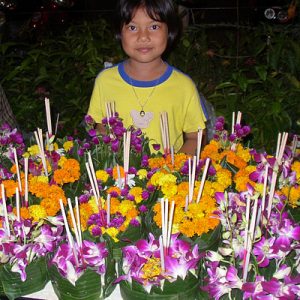 Baskets are hand made from banana leaves, decorated with flowers, incense and a candle and are sometimes filled with a strand of the owner’s hair or nail clippings. There is a quiet moment of reflection as the basket is released – and, for the onlooker, the beautiful spectacle of thousands of candle-lit baskets weaving their way out to sea.

If you would like to see this traditional ceremony, or join in and float your own basket, head to the river bank in Krabi Town – there will be baskets for sale all along the roadside. If possible, check and choose a base made from a slice of biodegradable banana shoot or bread, rather than the increasingly common styrofoam, which will pollute the water.

Afterwards, you can head to the big Loy Krathong market, up on the hill next to City Hall for street food and bargain hunting. 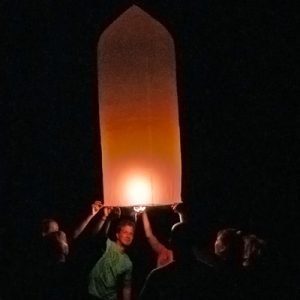 On the other hand, if you want a more spectacular show, head to the very non-traditional celebration in Ao Nang. As there is no river here, a few years ago, tourists started floating baskets out in the sea, figuring fresh / salt water are “same-same-but-different”: but even the canny ones, who waited until after 11pm for the tide to start going out, found their little baskets being overturned in the waves – not terribly auspicious.

Then some entrepreneurial types convinced them that it would have exactly the same mystical effect – with no bad karma – to light a fire balloon and watch it sail up into the sky. Now the balloons are being sold at 100 baht a pop and have all but replaced the traditional basket. [Update 2018: due to a series of fires and accidents, these fire balloons are now banned in Ao Nang]. 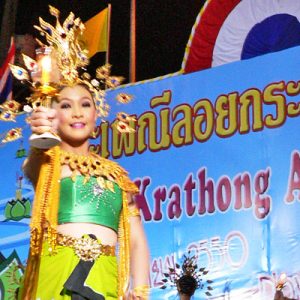 Dancer on the stage at the Ao Nang celebrations

Perhaps in response to this, Ao Nang District Council started a Loy Krathong Festival on the beach, with all the big hotels outdoing each other to contribute the largest and most fancy basket. These are not floated, but displayed along the sea front, following a colourful parade through the village.

(The beach road will be completely closed to traffic from 5pm until midnight, so locals please note and move your car in time. Parking is expected to be difficult, so bring a motorbike, or be prepared to walk.) 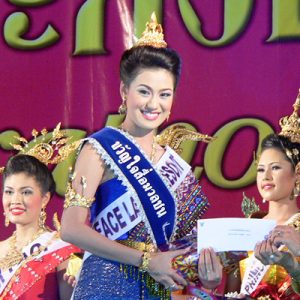 A previous winner of ‘Nang Noppamas’ collects her prize

From around 6.30pm, there will be a stage show, with cultural dance and music performances, as well as a ‘Nang Noppamas’ beauty contest, whose contestants are the region’s loveliest hotel staff. Nang Noppamas was a consort of King Lithai, who is credited with creating the idea for the festival, as well as the first basket.

The beach road without traffic is very pleasant and it will be a nice evening to take a walk: do however be careful of young boys with fireworks who seemingly fire at random and at close range, as well as the odd fire balloon that drifts inland and sets fire to coconut trees or – as happened two years ago – to the wiring near the stage!